Whites can be and are victims of South African genocide

11 March 2012
By Johannes Burke, University of Pretoria, class of 1984 8 Comments
I was picking up my daughter Monday afternoon at school to take her to a doctor’s appointment when I noticed something that warmed my heart. I saw several different messages in large chalk words around campus.
“Stop White South African Genocide” and “Stand Fast South Africa” were chalked throughout my short walk on campus.
When I left South Africa in 1998 and brought my family to the United States to flee the genocide of my people, I found that no one knew about what was truly going on or seemed to care. The idea that whites could be the victims was deemed “politically incorrect” by anyone I talked to, or the genocide was denied outright.
Back home, thousands of innocent white South Africans have been beaten, raped and butchered for no other reason than the fact they are white.
The countless funerals of family, friends, coworkers and fellow churchgoers I attended from 1994 to 1998 are testament to the cold hard reality of the genocide.
I don’t know who did the chalking, but I just wanted to thank whoever did for standing up for the silent victims of the ongoing Afrikaner genocide.
Hundreds of thousands of Afrikaners have fled South Africa, like I have with my family, or have died at the bullets and blades of the merciless mob. Unless the world stands up for the Afrikaners soon, there will be none left.
At least I know that my daughter and other Towson students are doing their best to start that awakening.

Facebook's hypocrisy when racism is reversed 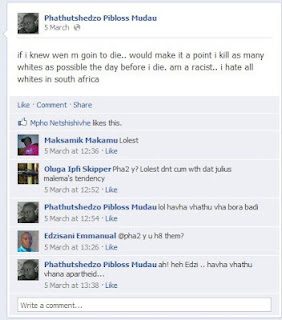 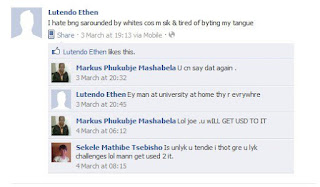 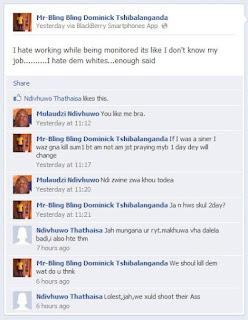