BRICS: While everyone is fighting the Jews the REAL New World is rising from the east

A New World Order?
US NEWS

"Western-style free markets are especially experiencing a systemic collapse and these economic models are not delivering as they once did. The free market system outwardly, at least, seems like it is failing the majority of the people in what is increasingly their growing hour of need. These and a myriad of other such issues have all caused global economic, financial, political, and social tsunamis and the magnitude and impact of these events and crisis has left relatively few national arenas unaffected—be it security in old age, long-term youth joblessness, or energy shortages. This has exposed the combustive fissure of income disparity and has lit a match that has instigated class wars on the wealthy and a sudden proliferation of technocratic unelected governments in the West."

Will BRICS Expand Into BRICSIT?

"One expert on emerging markets believes this will happen, with the BRICS nations – Brazil, Russia, India, China and South Africa – extending invitations to Indonesia and Turkey to join the club, as it expands its footprint into new regions.

Institutional and Cultural Response to Disintegration

My offering here is a modified distillation of this,

However, when the balkanization is underway the Institutions or cultures will try to stave of the inevitable coming crumbling by,

This usually entails crying for unity and the attempt to change the subject whenever the conversation turns to the friction of belief systems.

South Africa's current regime (ANC) refuses visas to a spiritual leader like the Dalai Lama, but grants visas to rabid anti-White racists calling for genocide of Whites; as does South Africa's president.

The new colonials have arrived.

Without as much as a whisper the South African government allowed at least 400 000 Chinese to swamp the country during the past six years. Chinese migrants, mainly from the overpopulated Fujian province in China, have been shipped off to South Africa at an alarming rate. Spreading all over the country.

Even in the remotest parts, between 6 000 and 12 000 Chinese shops sprang up indicating that the phenomenon is well-orchestrated by both China and South Africa.

Prof Colin McCarthy, retired from the University of Stellenbosch, first noted the Chinese colonization. Says Prof McCarthy: All the evidence indicates that the project to set up such an extensive network of Chinese shops, all following the same pattern and targeting the same market, was well researched, well planned, well organized and well financed.

FEMA says - Get a Survival Kit - Eskom may collapse this winter

South Africans should brace themselves for what could be the most difficult winter as electricity supply remained constrained, the Public Enterprise Minister Malusi Gigaba said on Saturday.

“We need to worry about how we are going to go through this winter,” Gigaba said.

“We need to change our behaviour... instead of using heaters people should rather use blankets.”

Was Nelson Mandela jailed for his "political beliefs?"

“This book is in stark contrast to those that have gone before it. For the first time South Africa’s history is depicted as it really was—shorn of politically correct evaluations and comment. With real people, incidents and events it tells the real and brutal story of the taming of a harsh, yet beautiful land. The blood and the battles, the dust and the sounds and smells all paint a most vivid picture. Anyone who reads this book cannot fail to understand more of the real dynamics of Africa: its cruelty, harshness, and unforgiving nature is stripped bare in Bulala . . . Read it and think again.” — David Taylor, New Zealand 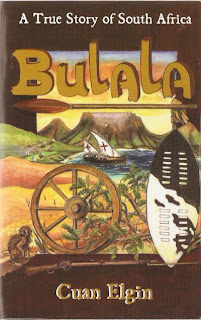 [* "BULALA abaTagati" means in Zulu, "Kill the Wizards!" These were the words Zulu king Dingane used in 1838, when ordering his bodyguards to execute the Boer emmissaries, shortly after their mutual signing of a land treaty.]

"If you haven't yet read this book, then you are missing out on an epic of not only great sensitivity, but also of accounts of many betrayals so ghastly as to set your teeth on edge!

This should be read by not only ALL South Africans of ALL colour, but also by people of other Nations who are not aware of our history. Cuan Elgin has a gift of attention to detail which is quite remarkable in a man so young and his ability to feel the heart of a woman is truly remarkable.

His great faith in God is very evident as he embroiders this narrative richly with not only his own faith, but also that of the forefathers of this Nation who dared to trust their God even in the face of such desperate circumstances.

If only one of his intentions in writing this history of our Nation, is to remind us of the kind of mettle and courage and bravery of the men and women who opened up our land with their own blood and tears, then he has succeeded!" - An endorsement by Lolah Peel

The gripping tale of the beginnings of a small, brave, Christian nation born of both extremes of the emotional spectrum: conflict, turmoil, and tragedy as well as love, dedication, and adventure—this exciting historical account of the history of South Africa (from earliest times to the end of the 2nd Anglo-Boer War at the dawn of the 20th Century) is woven as a rich tapestry into the form of a novel.

Power outages are coming and the SA Rand will plummet

South Africa CANNOT survive 7 days without electricity. The South African currency has weakened 8 percent this year, the most out of 25 emerging-market currencies monitored by Bloomberg.

The history of Africa has consistently shown a particular trend:
Ask yourself how far are we down this path already.....?

When electricity supply collapses:
Everything would come to a standstill and South Africa would regress back to a time before WW2.

Are you ready yet?

If the smelters close down people would lose their jobs and Richards Bay municipality would receive a smaller income, but South Africa would have more power, which would mean more time to build power stations

Fin24’s sister publication Sake24 on Friday won a long legal battle in which the Court of Appeal ruled that BHP Billiton must make public the prices it pays Eskom for electricity.

Eskom is making massive losses because of the low prices that BHP Billiton is paying.

The country would hence not have had an electricity crisis if Eskom had not supplied power to BHP Billiton's two aluminium smelters, Hillside in Richards Bay and Mozal in Maputo.

According to Sake24’s information, these two contracts are entirely responsible for the R9.5bn loss Eskom suffered in the year to end-March 2009, which it blamed on “derivatives”, an accounting term for prices that are calculated on the basis of external factors.

The two BHP Billiton smelters alone use 5.68% of Eskom's power generation capabilities, and all indications show they may receiving the power at lower than cost price from Eskom.

Hillside, the bigger of the two smelters, uses 1 200MW, which makes it the third biggest electricity user in the country. This usage is only surpassed by the cities of Cape Town and Durban, which each uses 1 300MW.

I loved the way news about the failure of the Hitachi boilers at the still-under-construction Medupi power plant was handled. While conceding that Hitachi, partly owned now directly by the African National Congress (ANC) through its investment arm, Chancellor House, and through which it got the multibillion-rand boiler contract in the first place, had made a mess of the boilers Eskom required, the spin was that there were many other problems at the plant as well.

Yes, maybe, but none of them were brought to us courtesy of the ANC’s party-funding machine. I trust Eskom has the courage to require significant penalties from Hitachi for the mess. Medupi was supposed to come onstream this year. I doubt it will, in any meaningful way, because the boiler problem is just too serious. Remember, too, that Hitachi/ANC is also supplying boilers to Kusile, the coal-fired station that is set to follow Medupi.

Between them, the two power stations will add 10% to SA’s generating capacity. But until Hitachi gets its act together and produces a boiler that won’t explode as the steam inside it builds to unthinkable pressure levels, they’ll produce nothing.

PROPOSED PROSPECTING FOR PLATINUM ON THE FARM DOORNPOORT 295 JR

WOULD YOU LIKE A MINE RIGHT ON YOUR OWN DOORSTEP? 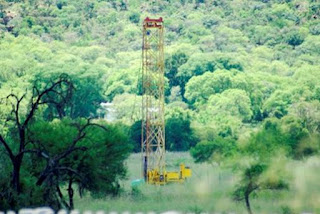 Gemsbok Platinum (Pty) Ltd. has lodged an application for platinum prospecting rights on the remainder of the Farm Doornpoort 295JR, situated approximately 10 km north of Pretoria on the outskirts the suburb Doornpoort.

To view the area on Gloogle Maps click HERE

An environmental consultancy has confirmed that Gemsbok Platinum (Pty) Ltd, a subsidiary of Sable Platinum Holdings has lodged an application for prospecting rights with the Department of Minerals and Energy on this land that is in extent of 2779,64 hectares. (Source)

The proposed prospecting would be conducted over the next 5 years.

Awarding of prospecting rights would lead to mining permits. Mining activities can affect the area for up to 30 years.

This development would most probably impact negatively upon ALL property prices in the enitre Doornpoort, Sinoville, Montane, Magalieskruin area. In fact it would impact on the entire region, including the Moot area, Derdepoort, Kameeldrift and surrounds.

The quiet neighbourhood north of the Magalies berg would be lost forever - squatters, violent mining strikes, hostels and compounds, dust, noise, traffic, trucks and every other curse would follow.

So South Africa is a stable economy built on solid rock is it?

There is not a single example in the history of the world where a revolutionary communist terrorist movement had taken control of any country and made a success of it. One could call a terrorist a "freedom fighter", but once a terrorists, always a terrorist. Never in the past 100 years had the ANC ever had to work for their money, because standing with their cupped hands they've always been sponsored by a criminal liberal world. The ANC is nothing other than a bunch of spoiled beggars. Anyone who gives a country to a group of beggars with AK47s must expect the worst. Anyone who sympathises with the followers of terrorists is a fool to say the least. Only liberals are so feeble minded as to think it could work. Perhaps it has been working for the appeasing liberals who took their BEE money and fled, but the rest will suffer the consequences of the actions of the appeasing industry and liberals.