According to a Sapa article, 47% of credit-active South African women are in arrears with their clothing accounts, which calculate to 2.7 million women, but that is not correct.

“In the second half of last year, over 50 percent of these women were three months or more in arrears on these accounts. By the end of the first half of 2014, this figure had dropped to just under 47 percent,” said TransUnion SA manager Tersia van Rooyen.

“While this improvement is to be welcomed, when one looks at actual numbers the picture is less rosy. In effect, over 2.7 million women are currently in arrears on their clothing accounts.”

TransUnion SA found that women’s financial health was improving slightly but it could be better.

Van Rooyen said that with more than 40 percent of South African households headed by women, it was unfortunate that women were not as financially healthy as they could be.

She said women presently accounted for more than half (53 percent) of South Africa’s 18,057,953 credit-active consumers.

The sharpest increase in delinquencies between the second half of 2013 and the first six months of 2014 occurred in the bank loan sector with 175,603 women three months or more in arrears. - Sapa"

47% of South Africa's credit-active women are in arrears 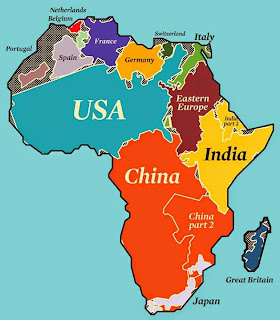 Of course Africa's GDP being less than just that of India alone, will be blamed on "colonialism", "Western countries' exploitation of poor Africa" and let us never forget the terribly "oppressive" "Apartheid".

The fact of the matter is that, while liberals have for decades been trying to convince the world that Africa is the birthplace of Humankind - that is according to the religion of "Evolution", a highly imaginative theory about Humans having originated from some fish droppings or a bug that escaped a huge explosion that lasted less than one trillionth of one second - Africa, after all these millennia, remains as unproductive as it was when it broke away to become a separate continent.

Do not for one moment think that Africa's $1.5 trillion GDP is as a result of their own hard work and innovation. At least 80% is thanks to other countries' involvement and investment in African countries, because self-entitled Africa does nothing for or by itself. Why? Because, the world owes Africa.

Now Africa also has its own definition of "investment". China bribes some leader for mineral rights in a particular country. China then starts a mine, but it has to get the raw minerals to a harbour for export back to China, so it builds a road from the mine to the harbour. Africa calls that "investment in infrastructure development". By the time that the mine has been depleted of the last grain of minerals, the road from the mine to the harbour has also been destroyed by the heavy trucks, and the Chinese pack up their bags and leave, but the leaders have their money, which is all it was about in the first place.

According to so-called experts (real experts not the Africa Check kind), the standard of living of individuals in a country is also a critical factor in determining what is happening in a country and not the state of its GDP alone. Well on that score Africa hits maximum rock bottom of course. According to that mathematics of Nigeria, it is now the richest country in Africa with a GDP, as calculated by themselves, of $510 billion, while it is one of the poorest nations on earth.

Now one cannot just look at GDP against which to measure the massive physical size of Africa, compared to the many countries that could fit into it. One also has to look at things like innovation and patents, which Africa has none of.

One also has to consider Africa's contribution to human growth, like educational advances, scientific discoveries and engineering that it gave to the world, which it has none of.

There is evidence of teaching at Oxford University as far back as 1096. Jan van Riebeeck landed in the Cape 556 later and found not even a pencil or writing skills. When Jan van Riebeeck landed in the Cape, he found no schools, no libraries, no universities, no pencils or pens, In fact he did not even find a wheel or a brick, because Africa had not been given any of those yet.

So besides being the world's greediest and most selfish continent of unproductive consumers, what has Africa done for itself, let alone for the world? Two things that Africa has more of than the rest of the world combined, are arrogance and self-entitlement.

Africa should have been the food basket of the world, but agriculture is non-existent.

It is the most blessed continent in terms of mineral wealth, but it always has and always will allow itself to be plundered, while blaming the plunderers for plundering it.

Nothing, besides growing self-entitlement and arrogance, has changed in Africa in the past 2000 years and nothing will change in the next 2000 years. In 1000 from now black South Africans will still be blaming Apartheid and white liberals will still be crying about the fact they could could never find any evidence of the atrocities they tried to accuse the National Party government of.

In 2000 years from now Africa would still not have invented anything and they'll still be demanding that the rest of the world owe them, still demanding that they be taken care of, while accusing, blaming and insulting those very givers of their daily bread for ever wrong on this dark backward continent that had to this day never even experienced some form of Renaissance.

The past week in South Africa under the ANC

Under the ANC, South Africa has the 3rd highest youth unemployment rate in world. The report estimates that more than 50% of young South Africans between 15 and 24 are unemployed. Just as in 1976, madness as rioting SA school children loot Johannesburg shops - Déjà vu

South Africa's social grants now covers 11 million recipients - which means that more than half of South Africa's children qualify because their parents' annual income does not exceed 74,400 rand ($7,000) and they live in extreme poverty. The government wants to raise the age limit from 18 to to 23 years, because "Everything stops when a child becomes 18. (But) your situation does not stop because you turn 18, you may even head a household" says the socialist Regime.

Ten of the 12 young women leaving for India to study pharmacy or ultrasonography have been implanted with the contraceptive Implanon, which will prevent them from falling pregnant for three years. The group of 30 students in total left for India this morning on state (tax payer funded) bursaries to study at the Manipal University in Jaipur. Does SA not have universities? Four girls had been taken off the Cuban doctors’ programme after they fell pregnant. “We are protected from pregnancy now, and since you know you won’t be getting pregnant, you might get reckless. But it was made clear that it does not protect you from diseases,” one student said.

Do SA taxpayers pay students to go to study overseas or to have sex?

Please bear in mind that only 3.3 million South Africans are paying 99% of all taxes.

ANC Regime agree to renew all 270,000 permits under the "Special Dispensation for Zimbabweans". The special dispensation permits allowed about 270,000 previously undocumented Zimbabweans to formalise their stay in the neighbouring country, while more than 6,000 bearers of illegally-obtained SA documents were granted amnesty.

Angry residents chase criminals into hi-jacked building in Johannesburg CBD and set it alight with petrol bombs. Residents refuse to allow criminals leave nor emergency services near the building saying they want the criminals to burn.

The ANC's SA President Jacob Zuma was stranded in Bloemfontein due to shortage of pilots and a retired SA pilot was called upon to fly him out.

Telkom spent R1.355 billion on consultants and security over the last year, because they can no longer do the work themselves.

The Mail & Guardian last week revealed the Asset Forfeiture Unit (AFU) had obtained provisional court orders freezing contract claims against the Gauteng department of health amounting to R1.4-billion, including a R1.1-billion claim by the Baoki Consortium.

The 25-year-old daughter of ANC's President Jacob Zuma, that Man from Nkandla, was recently appointed as head of a ministerial department with a salary of close to R1-million per annum.

SA farms are in a "death spiral", with thousands of farmers abandoning their land. Of the 276 000 farming units in Gauteng, including large-scale and small intensive farming units, 70% lie unused as farms - most standing idle or being used as scrapyards and second-hand car dealerships. Emerging farmers are among the most squeezed, with hundreds quitting, and claiming that the government has "abandoned" them, with no skills and little access to markets. The ANC's Rural Development and Land Reform Minister Gugile Nkwinti wants white commercial farmers to hand over half their farms to black farmworkers. The government pays for the 50% to be shared by the labourers, but the money will not go to the farmer. It will go to an investment and development fund.

South Africa listed among the countries with the Highest Fuel Prices while e-tolls are adding further pressure on vehicle owners. Traffic congestion in SA is a nightmare - 1 million cars per day on Ben Schoeman and growing.

In the past financial year, Eskom said it had spent R10.5 billion on diesel. Significantly, this was double the budget. Two years ago, it spent R8.1bn. Soaking up Eskom’s cash are the two diesel-powered turbine plants originally intended for back-up power needed when demand surges or there are temporary supply shortfalls. Eskom is compelled to use these fuel-gobbling generators to meet electricity demand in the Western Cape. Their consumption produces beatific smiles on the faces of oil company chief executives.

The Mpumalanga health department was placed under curatorship in June because its infrastructure was not maintained and laundry services were poorly managed. There were problems with food provision and waste management. "This resulted in the department accumulating pre-audited accruals of approximately R470-million, which it failed to manage"

60,000 Pensioners are suing South Africa's Transnet for over R80-billion ($7.5 billion) in a class action suit to recover the stolen funds.

Numsa's metals & engineering sector strike has caused irreparable damage to SA. About 10,000 businesses that were forced to close their doors and lost untold sales and profit. Non-aligned industries such as the automotive sector that had to close because their Metal and Engineering Industries Bargaining Council-aligned suppliers were forced to stop. About R1.3bn in wages were lost. South Africa’s economy lost about R6bn in gross domestic product. Who can estimate the longer-term damage in terms of companies closing, jobs lost and future investors having been scared away.

Copper theft remains a concern in SA - 166 metric tons of copper stolen in June, 214 metric tons in May.