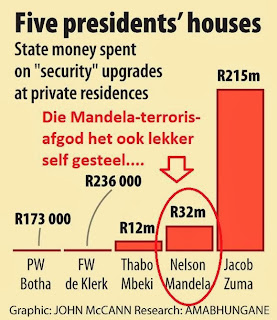 I'm not all that impressed, let alone shocked, by the latest chart doing the rounds, comparing the taxpayers' money wasted on the homes of the past five presidents.

I'm beginning to think that it is all propaganda. Now I am certainly no Jacob Zuma fan, but I think we have to be reasonable at all times. What is good for the goose is good for the gander, right?

Firstly, at least R91 million should be added to Mbeki's figure, because the R12 million mentioned in the chart, which mysteriously excludes the R 91 miliion spend on building a wall from imported materials around his house.

it also does not mention all the money ever spent on all Mandela's residences.

Self determination has been on the cards for many years and the belief that the old Boer Republics should be re-established and returned to the Boers has been with us for decades. The question is whether any of these are achievable, given our situation, differences and history.

There are mainly five ways of handling problems and obstacles: Fight, Flight, Ignore, Circumvent, or Join.

One could face it head on and confront it with brute force and determination.

This approach always comes at a price. Wars are good examples.

Wars always cost money and lives. Even the victor will be left with many scars.

The Ant and the Grasshopper... New South African Version

There are Different Morals

The ant works hard in the withering heat all summer long, building his house and laying up supplies for the winter.

The grasshopper thinks the ant is a fool and laughs and dances and plays the summer away.

Come winter, the ant is warm and well fed.

The grasshopper has no food or shelter, so he dies out in the cold.

MORAL OF THE OLD STORY: Be responsible for yourself!

Attempted farm attack caught on security cameras in South Africa. Well trained - their goal is not to steal.
http://www.youtube.com/watch?v=Gm1UuJ33Kw0&feature=youtu.be

South African business outlook is at its lowest level on record

South African business outlook is at its lowest level on record, down from 71% in 2011 to 18% for the next 12 months into 2014, according to Grant Thornton’s International Business Report (IBR) quarterly tracker survey.

The amount of R30.8-billion squandered by the SA Government is 24% up on last year's R24.8-billion of wasted taxpayer’s funds and according to some economists the total figure could be closer to R100bn or more.

South Africa's economy is in decline following the strike in the motor industry, according to the BankservAfrica Economic Transaction Index (Beti).

"This is disappointing and could indicate that the 3% growth expected for next year may be a pipe dream if no improvement occurs in the last two months of the year", economist Mike Schüssler said.

The monthly and quarterly Beti showed an actual decline of 1.3% and 1.5% respectively.

His father Derrick Robert McBride and mother Doris were teachers at a Clairwood school. His maternal grandparents were Collin Campbell van Niekerk, a White Afrikaner, and Grace, a Coloured daughter of a Zulu-speaking mother and a Coloured father.

His father opens a workshop 'Utility Services'. At some point in 1978/79 his father begins burglar guards, fire-staircases and other light engineering steel work, where McBride assists. Robert is also involved in the collection of payment from customers, and has many encounters with gangs.

December 1980, Robert McBride receives his school leaving results, expecting high marks in Maths and Science. The results are poor and for the first time he stands up to his father, explaining the results by saying that he had to work for in the family business.

In 1981 McBride gains entrance to the University of Natal and begins studying Mechanical Engineering. He fails his first semester at university and subsequently drops out. He again works with his father for 3 months and then as a dock shiftworker for another 4 months.

There are many arguments for and against voting next year.

We are working towards a solution for our situation. Many argue that voting in this system is legitimising a corrupt, illegal system, which is all fair enough.

The problem is this, many people hate the hydrocarbon-driven internal combustion engine and we are working towards engines running on water and electric vehicles, but in the meantime, while working on those new engines and systems, we are still forced to drive petrol / diesel vehicles.

We are still stuck in this system and we need to survive and fight for our rights right here in this system while we are stuck here. With no one in parliament to argue and fight on our behalf, to fight against racist BEE and AA Laws being passed, we would be dead in a year. We still have to be there and the stronger the voice we have inside the better the chances of us surviving until we get where we are hoping to end up.

Not voting is foolhardiness that cost us in the past.

What we need to agree on is who to vote for, which I've discussed in the past and explained why. If we cannot even agree on something as simple as that, how the heck could we ever agree on the solutions to much greater problems facing us in future.

1. Hear no evil, see no evil, speak no evil.
Regardless of what you know, don't discuss it -- especially if you are a public figure, news anchor, etc. If it's not reported, it didn't happen, and you never have to deal with the issues.

2. Become incredulous and indignant.
Avoid discussing key issues and instead focus on side issues which can be used to show the topic as being critical of some otherwise sacrosanct group or theme. This is also known as the 'How dare you!' gambit.

3. Create rumor mongers.
Avoid discussing issues by describing all charges, regardless of venue or evidence, as mere rumors and wild accusations. Other derogatory terms mutually exclusive of truth may work as well. This method works especially well with a silent press because the only way the public can learn of the facts are through such 'arguable rumors'. If you can associate the material with the Internet, use this fact to certify it a 'wild rumor' from a 'bunch of kids on the Internet' which can have no basis in fact.