The murder, torture and terrorizing of White people in South Africa

While many are tying to silence those who speak out, the murder, torture and terrorizing of White people in South Africa is continuing unabated!

*1 July 2013: Struisbaai, Western Cape: Rex and Irma van Zyl were assaulted in their home by a black man. Rex was badly beaten. Their attacker fled with R50 and a packet of cigarettes.

*1 July 2013: Port Edward, Natal: A mother and her 2 daughters, on holiday from Pretoria, were attacked by a gang of black men while taking a stroll to the beach. They were brutally assaulted and robbed.

*1 July 2013: Springs, Gauteng: Elderly couple, Dirk and Rita Koekemoer, were attacked by a gang of black men when getting into their car. Dirk was stabbed several times and thrown on the back of his LDV. Rita was assaulted and also put in the back of the vehicle. They were dumped in the veld some distance from town. Dirk died from his wounds and Rita spent the entire night searching for help. She was eventually found the next morning. She is in hospital.

How Liberals' Denialism Bred A Culture of Entitlement Among SA Blacks

The Tshwane Metro is paying too much for goods in order to benefit certain providers. They pay R4,320 for a 40mm galvanised pipe that could be purchased for R439.

Well someone has to take care of the poor blacks who were given Black Economic Empowerment companies with huge Government contracts to get them started.

Did you know that according to liberals this is how it worked in the days of the NP, pre-1994?

According to liberals whites were given such preferential treatment, while blacks were not.

Remember that according to liberals white South Africans kept blacks locked up in cages and we are said to have gone hunting blacks on Sundays just for the hell of it. That is what liberals have always been telling the outside world.

According to liberals whites were all made rich by the NP government, we were given houses for free together with free water and electricity.

According to liberals our children went to school and universities for free and all white school leavers were allowed into university, even if they did not graduate with a matric.

Yes that is what the liberals have been telling the world over the decades. 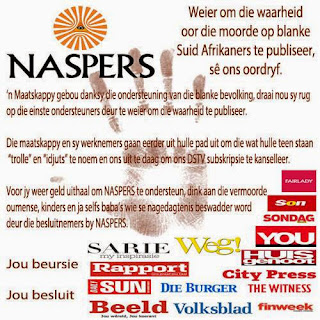 Another black-on-white attack for liberals to deny

Of course, the "Government", SA Police, Statistics departments, and every other piece of liberal flotsam and jetsam in this sick society, not forgetting the media - especially the Liberal Afrikaans media - will wipe this off the table as "normal crime"

Normal for whom??? The savages who committed this cowardly act?? Probably, since they seem to know only excessive violence - which seems to be a "normal" part of life.

But then they actually admit that there is a major flaw in this "equality" theory which they hang on as their pseudo religion.

Another BLACK ON WHITE attack, which ends up in the statistics as "normal murder" and ignored when a case is being made to prove once again that the level of violence by BLACKS ON WHITES is totally out of proportion, and can not be seen as anything other than Genocide.

On Monday night, 01 July 2013, Dirk Koekemoer (79) and his wife Rita (75) were attacked and overpowered by FOUR black attackers when they arrived at their little Nissan 1400 LDV in Geduld, near Springs on the East Rand, ‎#Gauteng South Africa.

Below is the ANC's SA President Jacob Zuma's welcoming address to US President Barack Obama at the Union Buildings in Pretoria, South African 29 June 2013.

Please take note of Zuma's requests to Obama regarding Cuba, Zimbabwe, the Middle East and please also note the ass-crawling.

Let me welcome you, your family and your delegation to South Africa.

This is your second visit to South Africa and your first as President of the United States. We are delighted to host you.

Let me also congratulate you on your re-election as President.