While everyone is making the biggest hype in history about a 13-year-old lion, with a life-span of 15 years and his contribution to the gene pool and survival of his species ending at the age of between 10 to 12 years, I shall rather focus my attention on the survival of one of the countries that have been growing the numbers of the lion species, being South Africa. There are more than enough people all-over the world fighting for Cecil the 13-year-old Lion, so I am quite sure that it does not need any further input from me.

Here is a letter from a "Concerned Johannesburg citizen" to the Gauteng Premier David Makhuru, which might as well have been written to the president of South Africa, as this is the state of things throughout the country:

"I write on behalf of those living and working in Johannesburg who are killed, robbed, intimidated, and brutalised by criminals on a daily basis. Black, white, the aged, women, children, physically and mentally challenged, no one is spared.
Johannesburg is in a state of emergency due to the level of crime. Nowhere is safe and people are virtual prisoners in their homes. Arriving or leaving home is a nightmare. Our children travel to and from school in fear.
The rise in crime has an impact on all Gauteng citizens, and load-shedding makes it easier for criminals to escape.
We need an urgent solution to the crisis in Johannesburg and Gauteng.
We as Community Policing Forum members are unable to make a visible difference. Not even the police are able to curb the crime plague.
The police need the support of the SANDF to restore order. Public order has broken down, and state security is threatened.
We have become a failed province on the issue of crime, failing to protect our citizens.
Premier, we beg that the SANDF be deployed in Johannesburg before another family loses another father or mother or child to crime."

Here are few other issues in our newspapers that I have tweeted over the past seven days (The tweets listed below can be found at @toxinews): 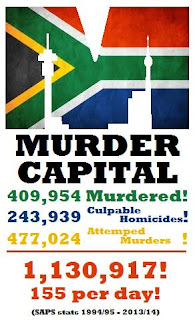 By November 2014 The Islamic State of Iraq and Syria (ISIS) has executed nearly 1,500 people in Syria in the five months since it declared the establishment of a "caliphate" and when It Comes to Beheadings, ISIS Has Nothing Over Saudi Arabia

Using this outdated estimate and 2012/13 rape statistics suggest that 444,384 rapes were committed in 2012/13.
The most recent study into reporting rates found that in South Africa’s Gauteng province, only one in 25 rapes (4%) had been reported to police.

"researchers estimated that approximately 100 million sharks are killed per year by humans. However, they add that this is a conservative estimate, and the true number could be as high as 273 million sharks killed annually by humans."

According to a national homicide study by the SA Medical Research Council, a total of 1 018 child homicides were recorded across the country in 2009 alone, with 454 being fatal child abuse cases.

As a matter of interest, I am not particularly fond of trophy hunting and personally I have an ethical and moral issue with trophy hunting, BUT I also realise that had it NOT BEEN for trophy hunting and hunting in general, South Africa's wild life would not have been steadily increasing over the years, and it would also have declined to near extinction as in the rest of Africa.

One has to weigh the pros and the cons of everything in life and we have to be practical and not just emotional about issues such as Cecil the lion.

In the meantime, while the world is running wild with the lion issue, the very same people screaming and crying on TV and social media about this lion, never say a damn word about ISIS, because they are too damn scared to say anything. It is therefore easier for them to cry and scream about a lion at the end of his life, than taking issue with serious matters such as the crime, murder, rape, beheadings, fraud and corruption of terrorist regimes.

Lion Numbers in South Africa vs the Rest of Africa

In 1999, there were between 800 and 1,000 lions in cages in South Africa. In 2005 there were between 3,000 and 3,500 captive lions. According to credible organizations like Panthera, South Africa has between 2,700 and 3,200 “wild” and “managed” lions—split roughly 50/50. The wild lions live in two parks, Kruger National Park and Kgalagadi Transfrontier Park. Managed lions inhabit private reserves such as Phinda and Tswalu and are managed in the name of keeping the gene pool diverse. The South African Predator Association (SAPA) keeps track of captive lions and captive breeding facilities, and based on interviews we’ve done with SAPA and also with the South African department of environmental affairs, some 7,000 lions now live in captivity.

Throughout Africa many people and organizations are working to assess the numbers of lions in a variety of areas.

On this page we will bring you the latest news as we get it about the remaining lions in Africa.

February 2014:  Surveys of lions Panthera leo in protected areas in Zimbabwe yield disturbing results: what is driving the population collapse?

Direct estimates of lion populations from surveys in Gonarezhou suggests a total population of 33 lions (95% CI 28–39).  In Tuli, no lions responded physically or vocally to calling stations, and no lion tracks were observed on the roads during 4 days of searching.

January 2014:  The Lion in West Africa Is Critically Endangered

Estimates for four areas containing lions in West Africa were given as:

"According to the results of a recent survey, African lions in Uganda have decreased by more than 30 percent over the past 10 years in some areas of the country, mostly the result of poisoning by local cattle herders, retaliations for livestock predation, and other human-related conflicts. The downward trend in lion numbers has conservationists concerned about the species' long-term chances in the country, often described as the "Pearl of Africa" for its natural wonders."

Estimates for five areas containing lions in Uganda given as:

Inside the Grim Lives of Africa's Captive Lions
http://news.nationalgeographic.com/2015/07/150722-lions-canned-hunting-lion-bone-trade-south-africa-blood-lions-ian-michler/

How Many Sharks Do Humans Kill Per Hour? | IFLScience
http://www.iflscience.com/plants-and-animals/how-many-sharks-do-humans-kill-hour

Will 74,400 women be raped this August in South Africa? | Africa Check
https://africacheck.org/reports/will-74400-women-be-raped-this-august-in-south-africa/

When It Comes to Beheadings, ISIS Has Nothing Over Saudi Arabia
http://www.newsweek.com/2014/10/24/when-it-comes-beheadings-isis-has-nothing-over-saudi-arabia-277385.html